The Bignells and the Pomeroys of Broadwindsor

The Bignells and the Pomeroys of Broadwindsor

This is not my research, but it is my family. More importantly, it is how I became hooked on Family Tree research.

This tree was created by the hard work and research of Robin Pomeroy and "Bobby" Barbara Ann Pomeroy nee Hood, over many years, the old fashioned way, without the benefits of the Genealogy websites we have today and their associated records

I have merely put their data on line for them, with their knowledge and permission, firstly on Ancestry, and now here. Transcribing one of the hard copies they circulated to the family, my Mum's copy, into database record format and sharing with the world.

I believe that the Chris Pomery (note the variation in spelling) above is the primary and registered researcher of the Pomeroy surname, and its variations, in the Guild of One Name Studies and runs the Pomeroy Family Association.

An extract from the PFA web site;-

Since the 1990s we've been running a genealogical project that aims to reconstruct the family connections of every one of our name-bearers across the planet. Since 2000 this has been augmented by a global DNA testing programme. Today our combined documentary/DNA project is probably the most fully-developed surname reconstruction project of its kind — certainly for a surname found in the UK population — and the DNA component of it is undoubtedly the best integrated within a traditional documentary genealogical study of any in the world. ...

I met Chris at one of the Family History Shows, where I was introduced to GOONS and first joined them. He also gave me a copy of his research paper. It is fascinating that so much information can come out of DNA research, including clusters of family groups, and migrations.

A normal assumption with two family groups in a small rural village would be that a little further back there would be a join, just waiting to be found. In a particular instance, the DNA research established that in that small village there were two distinct and separate Family Clusters.

The foundation stone in Robin and

Bobby's research is  the Marriage Certificate between Dan Pomeroy and Mary Ann Bignell on 4th July 1891 at St Lukes Church, Southampton. Both are on the front cover of the Family History Booklet that they passed to family members.

The earliest Pomeroy in the Tree is George Pomeroy of Broadwindsor, born in 1768/9

A story about him found in Ancestry.

George was born in 1779, in West Dorset, England. He was probably living in the village of Thorncombe, where he was the village blacksmith. Frances (Fanny) was born Fanny Gibbs, daughter of Thomas Gibbs, in 1781. George and Fanny were married on 11 November 1804. Their marriage is recorded in the Thorncombe parish registry.

However, there are some inconsistencies here, which is not surprising.

In the transcript of Parish of Broadwindsor, Marriages at Broadwinsor 1669 to 1812, his transcription by Stephen Spurle has been taken from "Dorset Parish Registers - Marriages" Vol 3. edited by W. P. W. Phillimore and Edmund Nevill and published in 1908, found on Dorset Online Parish Clerks (OPCs)

To cover derivatives and misspelling, there are 24 entries found containing 'Po', including some town entries, and a mix of surnames, and of course the Pomeroy entry above, plus one other found below.

This transcription by Kim Parker has been taken from "Dorset Parish Registers - Marriages" Volume 2, edited by W. P. W. Phillimore & Edmund Nevill, published in 1908. The extracts were made by Mr. Bartelot and printed by leave of the Rev. Prebendary Bragge.

Transcriber’s Note: Remember that until 1752, when the Gregorian calendar was introduced, the year ran from 25 MAR to 24 MAR (known as the Julian calendar), with 1751 being the transition year, running from 25 MAR to 31 DEC. Thus, an entry dated 05 FEB 1560 would be considered to have occurred on 05 FEB 1561 according to our current way of dating. However, it appears the Parish Clerk of Thorncombe was reluctant to switch to the new dating system, and the Julian calendar remained in use until 1754.

In the book, the dates appear on the right hand side and all surnames are in lowercase. I have sorted the entries into chronological order, whereas Phillimore respected the sometime random order of the entries (especially during the 17th century, when parchment was expensive and entries were inserted in any available space). KP

The only entry for a Pomeroy is below.

To cover derivatives and misspelling, there are 16 entries found containing 'Po', including one town, and the majority is for the surname Poor, and of course the Pomeroy entry above. 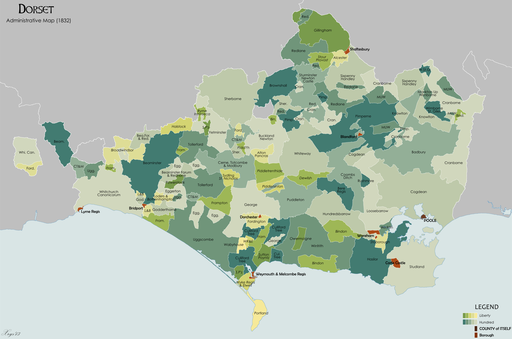 What is the significance, as the parishes of Broadwindsor and Thorncombe are relatively close to one another. The parish of Burstock cuts through the center of Broadwindsor. All can be seen on the Parish Map. The villages of the same name are, according to Google Maps, 5.2 miles and 1 hr 46 mins walking apart. Not a difficult distance even in the low mobility society of 1804. Location is one of the tests used to identify an individual, say George Pomeroy from another George Pomeroy living in the same period.

Checking with the current Esri map of Church of England Parish Map, the Church at Broadwindsor is St. John the Baptist. On an old Ordnance Survey map of part of the village of Broadwindsor, the Smithy is shown near the central crossroads. The map was Surveyed: 1886 to 1887 Published: 1888, over 80 years after the wedding, but perhaps still relevant. On the same sheet there is also a Smithy shown at Cole's Cross. Cole's Cross is 1.6 miles and 32 mins walking from Broadwindsor. However, St Andrew's Church, Burstock, Beaminster is only 11 mins walk to the South, along Rookery Lane. St Andrew's Church is within the Parish of Broadwindsor.

The parish church, although considerably altered during the 19th century, maintains its harmonious relationship with both the village and the surrounding countryside, much as it did in medieval times.

The font is of late 12th or 13th century date, indicating that a church has stood here since at least that time, but various parts have been partially or completely rebuilt at different periods.

During the first half of the 15th century the north transept chapel was added. At the same time the former, and no doubt smaller, chancel arch was replaced by the present one which is similar to that of the transept. Later in the 15th century the tower was added at the west end, of three external stages and with diagonal buttresses at the western angles. The embattled parapet is of the 19th century but the string course below it is original complete with grotesque gargoyles at the angles, one of which depicts a monstrous creature holding a man. The west doorway is original. The tower arch is presumably contemporary with the tower although not typical of 15th century work. The beams supporting the floor above the ground stage appear to be old timbers and may be original. The south porch as probably added during the 15th century but has since been rebuilt.

The chancel was completely rebuilt in the 19th century and later the whole building was subject to restoration. A faculty application approved on 22 March 1876 included replacement of all floor and internal fittings, removal of a gallery across the west end and various alterations to windows.

The transcribed Parish records for Marriages at St Andrew's does not reveal any Pomeroy(s). The Burials records show no Pomeroy surnames but does include place of abode of both Broadwindsor and Thorncombe as well as the more expected Burstock. There are no transcribed Baptism records at the Dorset OPC source.

Let us turn our attention to the Parish of Thorncombe. Firstly, the OS Map. The Dorset OPC records 47 Baptisms in 1804, and 11 weddings, with two of those being by license, and presumably the remainder by Banns. Much busier that St Andrew's.

Dedicated by Bishop Brewster of Exeter in 1239, by 1770 the old church of St. Mary the Virgin was not large enough to accommodate 'the fourth part of the inhabitants', but it was not until 1886-7 that a new church was built...

Another line of enquiry.

On the 27th December, 1800, John Muttlebury Vicar : Broadwindsor (07/05/1796 - 07/01/1808 ) opened a new register in accordance with The Marriage Act 1753, full title "An Act for the Better Preventing of Clandestine Marriage", popularly known as Lord Hardwicke's Marriage Act. (George II). The Broadwindsor Register of Mariages, Solimised in the Parish Church of Broadwindsor in the County of Devon. That church is St John the Baptist. John Stroud and John Davy were the Churchardens at the time.

The first marriage entry was;

No 36) George Pomeroy and Frances Gibbs both of this parish were married in this church by Banns this Eleventh day of November in the year One Thousand Eight Hundred and FOUR by Thomas Dyer Curate.
This marriage was solemnized between us  George Pomeroy his X mark and the Frances Gibbs her X mark. In the presence of Thomas Gibbs his X mark and James Brown. (Note, James Brown is recorded as the wittness in most of the marriages from 1801 to 1804, and perhaps more.)

I consider this confirms that George Pomeroy and Frances Gibbs were married in St John the Baptist and both resided somewhere in the Parish of Broadwindsor.

This is the foundation of the Pomeroy side of 'The Bignalls and the Pomeroys of Broadwindsor Family Tree'.

eorge Pomeroy and Frances Gibbs can now also be found on my TNG website.

There is a Smithy shown on the OS 25" map of Cole's Cross. Cole's Cross was shown as the place of residence on Fanny's burial Parish entry.

There is also a Fanny Pomeroy included in the tithe apportionment for the Parish of Broadwindsor.

The above extract from the hand written Tithe Apportionment for the Parish of Broadwindsor of 1839 includes Fanny Pomeroy, George Pomeroy, and John Pomeroy. Fanny's husband, George Pomeroy was buried on 9/12/1831, which even allowing for the compilation of the survey, predates it. George, the landowner of Plot 1418 could be a son. A map of the Tithe Apportionment shows a cluster of Pomeroy's as well as a Gibb. All three are landowners, which is impressive for the time. However, George has let his holding to George Hodges, whilst the other two occupy their plots.

There is no guarantee from this alone that this is a family group, however, it is a possibility. Gibbs is Fanny's maiden name, so Thomas Gibbs could also be related.

The other landowners in the hamlet are Edward Pratt and John Davis with the properties occupied  by John Gerrard and Samuel Iddon respectively.

That is the full extent of the occupation of the buildings in the hamlet of Cole's Cross. There are other Landowners and Occupiers in the surrounding fields, but not with a dwelling on this quite country junction.

Below, the same map without the lables and zoomed out to give and idea of location.

It is not that easy to see the corrilation with the OS Map with it's Northerly orentation compared to this map which is arranged to best fit the paper.

On the right is, I belive, a different image of the same Tithe Map. I have rotated it 90o to approximate the Compass Rose notherly direction. It is now more discernable as the same location as indicated on the above OS Maps as being Cole's Cross. The shapes of the roads and fields as well as the plot numbers confirm that it is the same hand drawn map.

A small inset showing the Compass Rose and a very small Cole's Cross. Unfortunatly Tithe Maps are frequently without place name anotations. So it is generally down to shapes to enable identification of the places by comparision to both old and current maps.

On the next map, having zoomed in slightly, Cole's Cross becomes discernible on the left of the map.

The Google Map below suggests that that small hamlet of Cole's Cross has not expanded a lot. Even some of the buildings appear to have a similar footprint to that found in 1840 and 1908.

Top 10 most read Articles on site